To Stand on Solid Ground 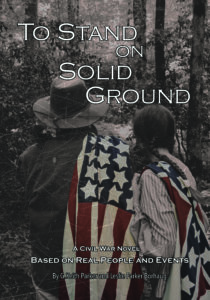 To Stand on Solid Ground: A Civil War Novel Based on Real People and Events

Based on real people and real events, To Stand on Solid Ground brings to life an unusual relationship between Confederate loyalists and Union sympathizers. The story is a deeply human take on the Civil War and the multiple battlefronts that challenged this mountain county and its people; struggles which our nation still faces today. To Stand on Solid Ground does more than merely report historical events; it transports the reader back in time to face the profound need to support each other in a time of intense polarity.  It offers insight, lessons and hope fitting to our current political divide.

Book Summary:  As a nation faces civil war and slavery is on the risk of collapse, a mountain community must make difficult choices; ones that involve life or death. Ones that risk shattering the bonds between family and friends.
North Carolina secedes from the United States of America the same day Transylvania County is formed. It is the same day Robert Hamilton is appointed as its first sheriff.  Many in the community share Robert’s opposition to slavery and his public plea to avoid secession, but the call to fight for, and support, the South is louder and clearly expected. Robert must find a way to uphold his oath as sheriff and be true to his conscience, even if it means bending the rules. Yet, he cannot do this alone. Calling on a few close friends and family, Robert hopes to avoid discovery, but there is a problem. Elizabeth Neill, the daughter of his deputy, pursues her interest in a Confederate soldier and harbors a growing suspicion that the Sheriff and his family have secrets. At the same time, her friendship with Pink, a young slave, challenges her naïve perspective on slavery.  As the war rages, the newly-formed county must decide how to confront hunger and ruthless bushwhackers, neither of which honor Union nor Confederate loyalty.

With sparing language reflective of this hard time and the characters living through it, the reader’s plate is continuously filled with strong images spiced with emotions. The pace and timing are effortless.

. . .thought provoking, educational, enthralling, haunting, deserving of a second read, and worthy of praise and recognition.
Not lost on the reader are stark parallels between the politics and divergent opinions and loyalties that tore at the fabric of society, even families, during the highly emotional and turbulent years of the Civil War and the civil unrest that challenges the foundational core of the United States today.

To Stand on Solid Ground paints a vivid picture with statewide appeal of what life was like for white citizens living in the mountains of North Carolina during the Civil War. The novel is a revealing portrait of a typical western North Carolina county (Transylvania) and its new county seat (Brevard), whose citizens, during the war, have to confront ambivalent allegiances, danger from bushwhackers, problems of local policies and law enforcement, and racial dynamics.

Not lost on the reader are stark parallels between the politics and divergent opinions and loyalties that tore at the fabric of society, even families, during the highly emotional and turbulent years of the Civil War and the civil unrest that challenges the foundational core of the United States today.

The father/daughter team in authorship effectively crafts devices such as changing fonts along with changing viewpoints to enhance the reader’s connection with the “coming of age” story of teenager Elizabeth Neill, told in first person, while alternatively switching fonts to signal the shift in viewpoint to a third-person, omniscient narrator focused on the more objective historical story of Sheriff Robert Hamilton, Transylvania’s first sheriff. Also noteworthy is the developing character of Pink – from child slave to free man during the course of the book’s narrative – further evidence of exceptional writing skills at work in the details and nuances of character development.

Astute use of eloquent language, mountain expressions, and colloquial verbiage for different characters lends a timeless understanding of the political, economic, and human trials present in that era. The reader faces the raw emotions intertwined with the atrocities of war.

Graphs, appendices, maps, a genealogical tree, and family photos are most helpful in keeping up with the characters, whose lives are entwined in the traumatic, troubling tensions that have invaded their lives.

The novel makes clear that Transylvania County is on the map today because of the frailties, strength, courage, and perseverance that enabled the ancestors of today’s citizens to survive the tragedies that tore their world apart. The fine line drawn between loyalty and conviction is alive in the after-thoughts of the characters and, obviously, in the legacy they leave behind.

To Stand on Solid Ground shows evidence of a tremendous amount of meticulous research and masterful writing to create a historical novel that is thought provoking, educational, enthralling, haunting, deserving of a second read, and worthy of praise and recognition.

The North Carolina Society of Historians