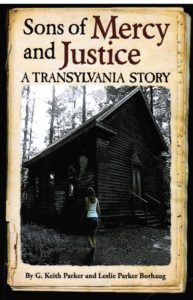 Sons of Mercy and Justice: A Transylvania Story weaves past and present together leaving the reader with a delightful taste of the people who settled the North Carolina Mountains and their strength that still defines the region today.

Book Summary:  The troublesome eighteen-hundreds seriously challenge the mountain folk of Western North Carolina.  The McGaha family is no exception and confronts the many trials with more kindness than most contemporaries.  Respected for his compassion for man and beast alike, Craf McGaha becomes known far and wide for his hospitality and mercy, especially when he and his wife set up a free weigh-station for the many drovers and their animals traveling along the turnpike on the way to market. Yet, in 1861 when Transylvania County is being newly formed, war erupts and Craf is forced into the Confederate army and he finds himself torn between fighting on the side of his conscience or on the side of his state.  Surviving the war and the loss of six of their own children Craf, along with others, builds a chapel with the hope of bringing divided people back together through worship.

Gathering strength and courage from Craf, his son, V.B., grows into a young man with a fierce sense of justice, only intensified by an encounter with the notorious outlaw, Lewis Redmond, also from Transylvania County, the subject of novels, legends and is better known than Jesse James. Becoming the youngest sheriff in Transylvania County, V.B. must face bi-partisan challenges and the growing battle with bootlegging.  Fighting the negative stereotypes of mountain folk, V.B. must educate outsiders about the integrity and personal strength of his people. He becomes a “Revenuer” with the Internal Revenue Service, riding horses, trains and eventually autos to experience many adventures in breaking up illegal stills, recording them in his pocket diary and typed IRS reports. His exciting, emotional experiences are paralleled by his love for, and loss of, two wives.

The summer of 2012 brings Millie, at sixteen, face to face with past and present struggles in Transylvania County.  In search of the county she once loved as a child through her visits with her grandmother every summer, she must come face to face with two brothers who threaten the peace in the community.  After an assault on Ellie, a young Hispanic girl, Millie has to find a way to separate her loathing of the older two aggressive brothers from their younger brother, Kevin, who seems defenseless in Millie’s eyes.   Can Millie find a way to stop the threatening brothers and still find friendship with Kevin and Ellie? Could an old revenuer pocket diary from V.B. McGaha bring her the courage she needs?

This is a magnificent story of the McGaha family and how they lived their lives in the mountains of Western North Carolina.  It describes their way of life in such a way that the reader is able to share their emotions in all different situations and at all levels.  Every now and then the story shocks us, surprises us, as something happens that was not expected . . . just as it happens in “real” life.

The book is set up where we are with the McGaha’s in one segment, Millie the next, McGaha, Millie, and so on; past present, etc.  We were taken in by both storylines, never bored . . . we didn’t have time to be!

Back to Books Page